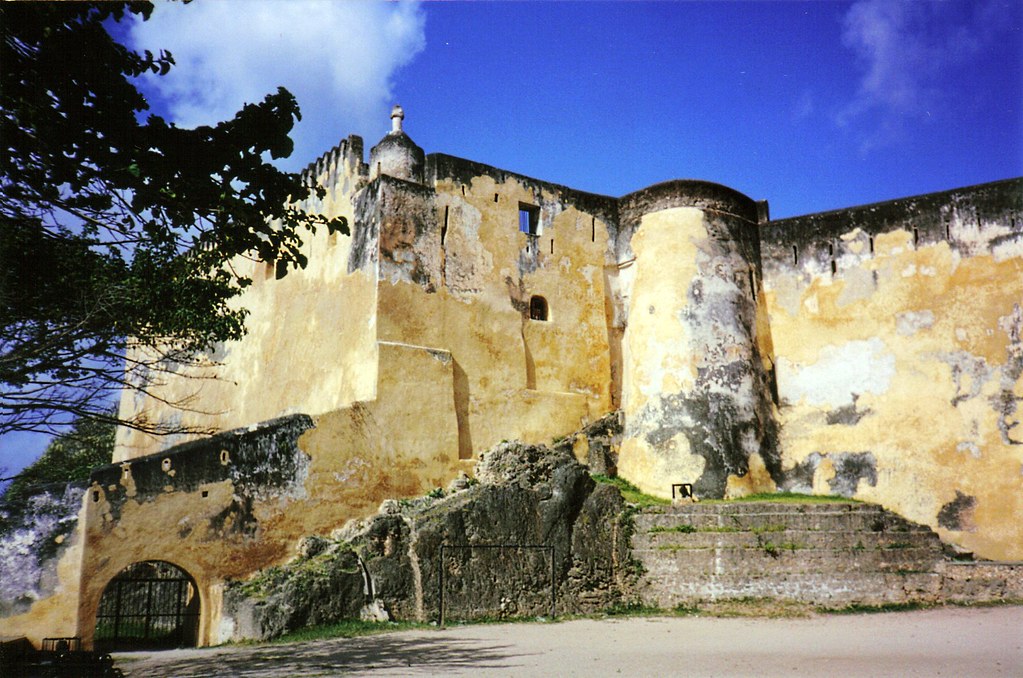 The Fort Jesus, built by the Portuguese in 1593-1596 to the designs of Giovanni Battista Cairati to protect the port of Mombasa, is one of the most outstanding and well-preserved examples of 16th Portuguese military fortification and a landmark in the history of this type of construction. Mombasa was a transit place for trade at that time and a gateway to India, and the fort was built to protect the town from outside invaders. Today, it has grown to become one of the most visited areas in Mombasa, and is on our list of top things to do in Old Town Mombasa.

The fort stood over a spur of coral, and it tells the story of how the Portuguese at one time ruled the trade routes of the Indian Ocean. Its location ensures that they could see any ship as it approached. It also tells the story of how many slaves perished from torture, hunger, and disease as they waited to be transported. During the East African Slave Trade era, slaves would travel to Arabia and the Persian Gulf through the port of Mombasa, many becoming laborers, guards, soldiers, or concubines.

During the 16th century, there were nascent cultural, commercial and political forces. The Portuguese built the fort by the designs of Joao Batista Cairato, who drew his inspiration from Pietro Cataneo, an Italian architect. However, despite the design being of the Renaissance period, with its five bastions, the building material and labor came from the Swahili people, who were the indigenous inhabitants of Mombasa. The fort takes the shape of a man when viewed from above.

After the Portuguese inhabited it, the fort was the subject of battle. Between 1631 and 1895, it was captured and recaptured, changing hands nine times, with the Omani Arabs winning control over it in 1698. In 1895, the British transformed it into a prison, and held slaves in the torture rooms and cells in the inner part of the fort. There were also cannons to protect the interior from invasions and dissatisfied locals. After recapturing it, the Portuguese refurbished it and has since been refurbished a number of times, its structures revealing Portuguese, Arab, and British influences.

Fort Jesus, Mombasa, bears testimony to the first successful attempt by Western civilization to rule the Indian ocean trade routes, which, until then had remained under Eastern influence. The design of the fort, with its proportions, its imposing walls and five bastions, reflects the military architectural theory of the Renaissance. It was used as a barrack for the soldiers and converted to a prison when the British protectorate was proclaimed.

The Oman House, the living quarters of the sultan who governed the East African coast, still stands in the fort. Other historical structures that are still intact include an open water cistern, which the Portuguese used to harvest rainwater, as well as a 76-foot deep well sunk by the Arabs.

The World Heritage Committee inscribed Fort Jesus on the UNESCO World Heritage List in 2001. Today Fort Jesus Museum is the ideal world heritage treasure to visit. It’s a magnificent and ancient landmark of Mombasa City that plays a vital role in showcasing the city’s rich history and cultural heritage. Inside the museum, there are numerous items that were used in the previous centuries.

At the entrance of the Fort Jesus Museum, there is an aerial map of the fort that makes it easier for visitors to understand the different sections of the fort and the roles they played when Fort Jesus was still in use. On display are various items and tools that were considered to be of utmost importance in those days; Fort Jesus Museum is a collection of items dating far back as the 14th century to 19th century.

Among the common items to see in this top Mombasa tourist attraction site include; an ancient Portuguese chair, Persian chest, drums, plates, gourds among other unique items that have been well preserved over the years.  Despite the fact that the indoor section of Fort Jesus Mombasa is not large; there is a lot to see.

Outside the Fort Jesus Museum is a unique and eye-catching display of canons neatly arranged signifying how controllers of Fort Jesus Mombasa in the olden times valued canons are superior weapons for destroying the enemy. The Fort Jesus Museum also has a large compound; outside the museum building, there are numerous wall hangings and items on display.

Fort Jesus has managed to retain its charm as one of the most visited heritage sites not only in Kenya but in the entire region.  Together with the indoor museum, Fort Jesus Mombasa is spectacle that still stands strong to remind us all of the events that gave birth to Mombasa.

Mombasa - Bison Safaris - Best of Kenya budget and customized migration safaris
Reply
[…] between 1593 and 1596 by the Portuguese, Fort Jesus stands guard at the entrance of the harbor towards the Old Port of Mombasa. The Fort remains one of […]

vreyrolinomit
Reply
I have been surfing online greater than three hours nowadays, yet I by no means found any fascinating article like yours. It’s lovely worth sufficient for me. In my view, if all site owners and bloggers made excellent content as you did, the web will likely be much more helpful than ever before.

ucretsiz
Reply
I just like the valuable information you provide for your articles. Adelle Christoffer Hodosh