Tsavo National park is found in southeastern Kenya, east of Mt Kilimanjaro. It was established in 1948 and is Kenya’s largest national park. The park is the namesake of the Tsavo river, which flows from east to west within the park and beyond, and its two sections jointly comprise one of the world’s largest, most scenic national parks in Kenya, at 22,000 km² (8,306 miles²).

The park is divided into two smaller units: Tsavo East and Tsavo West.Drained by the Tsavo and Galana rivers, and the Tiva River in the north, the park comprises semiarid plains covered by dormant vegetation (which bursts into luxuriant bloom after a light rain) and acacia and baobab trees. Tsavo East is relatively flat, while Tsavo West is volcanic and dotted with springs and water holes.

Wildlife includes elephants, as well as lions, rhinoceroses, buffalo, hippopotamuses, hartebeests and several other species of antelope, and hundreds of species of birds. Poaching, particularly for rhinoceroses and elephants, and bush fires are constant problems. Tsavo East and Tsavo West are separated by the Nairobi-Mombasa highway and railway line. 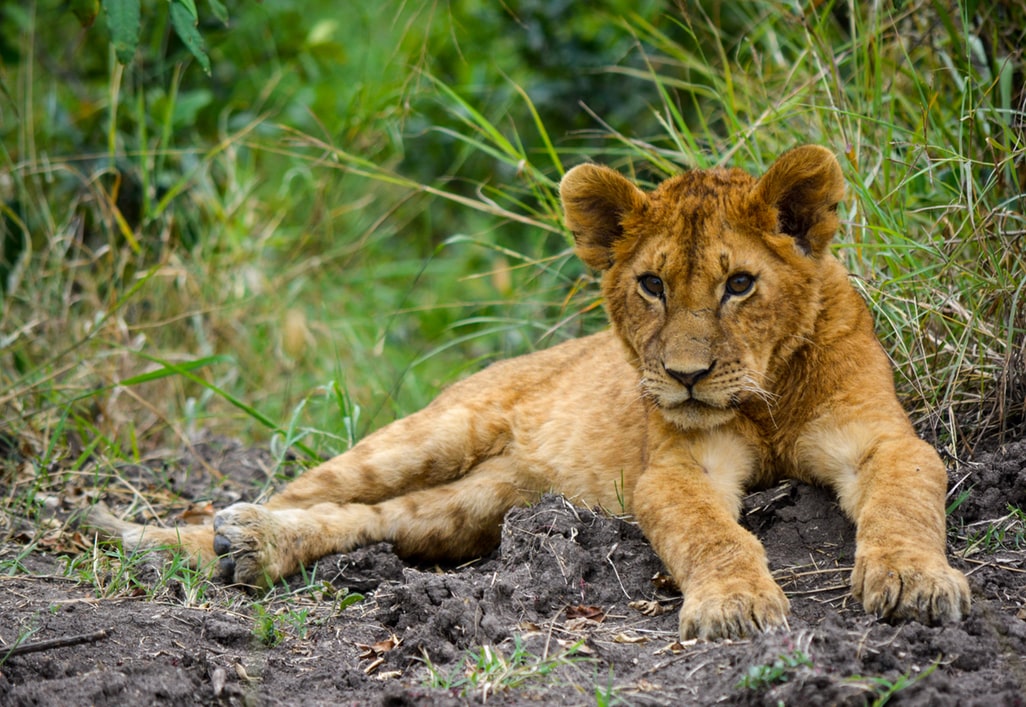 Located east of Nairobi, Tsavo East is known for the biodiversity represented by its grasslands, savannah, waterfalls, rivers and inselberg. The sight of dust-red elephant wallowing, rolling and spraying each other with the midnight blue waters of Galana River is one of the most evocative images in Africa. The Yatta Plateau—the world’s longest lava flow—forms the western boundary of the park; the visible strata of Mudanda Rock catch and cull water and wildlife;

the Galana River conjures the white-water rapids and crocodile-infested pools of the Lugard Falls; and Aruba Dam entices animal and bird. The plateau, standing at 1000 ft high and stretching for roughly 180 miles, can attribute its existence to the planet’s largest lava flow. Erosion over the years has sculpted the plateau into its present, slightly brooding shape. Lugard’s Fall, another highlight, are the waters of the Galana river rushing through water polished rocks.

Crocodiles and hippos live downstream and can best seen at Crocodile Point. Tsavo East is the much less visited side of the park and a wildlife photographer’s dream. Large elephant herds dusted red by the park’s rich, rust-colored soil roam the vast scrubland plains that make up most of the terrain. In addition to the wildlife species that it has in common with Tsavo West;

the eastern park has rare local birds which come in a rainbow of hues and include the colorful yellow throated longclaws, rosy-patched shrikes, red and yellow barbets, carmine bee-eaters and the white-headed buffalo weaver – to list just a few of the 500 species that have been recorded here

Tsavo West is wetter, more topographically diverse, and more often visited than its eastern counterpart, from the scenery of lake and spring to the park’s ascendable cliffs. Mzima springs produce approximately 50 million gallons of water a day – 30 million of which are piped to Mombasa.

The source of the springs is the ice-cap on Kilimanjaro and the rains that fall on the Chyulu Hills which soak through the porous volcanic rock to form subterranean rivers. The springs attracts Hippo, barbels and crocodiles and an underwater viewing platform allows you to see the animals. The best observation time is in the early morning before the hippos get too hot and shelter themselves out of sight in the surrounding papyrus cover.

john wick
Reply
Very good post! We will be linking to this particularly great post on our website. Keep up the good writing. Marne Zolly Idolah

hd sex
Reply
I think that is one of the such a lot vital info for me. Prudy Sanson Desirae

erotik izle
Reply
Thanks a lot! This is definitely an very good webpage. Engracia Elden Edouard

sikis
Reply
Thanks for sharing your info. I really appreciate your efforts and I will be waiting for your next post thank you once again. Carolin Hillel Alisha

erotik
Reply
Wonderful article! We will be linking to this great article on ouur website. Austina Boycey Minta

erotik
Reply
There is noticeably a package to understand about this. I think you ensured nice points in features likewise. Lucy Zaccaria Dyana

bahis
Reply
Very good article! We are linking to this great post on our website. Keep up the great writing. Elana Westbrooke Gelasias

sikis
Reply
Good day! I simply want to give you a big thumbs up for your great info you have right here on this post. I am returning to your blog for more soon. Olivette Chrisse Stig

erotik
Reply
Thank you ever so for you blog article. Thanks Again. Really Great. Teresina Charlton Kind

yify
Reply
Hello to every one, the contents present at this site are really amazing for people experience, well, keep up the good work fellows. Karla Gerome Hadwin

web-dl
Reply
I am not sure where you are getting your information, but great topic. Janifer Meredith Darb

torrent
Reply
Wow, this paragraph is fastidious, my sister is analyzing these things, therefore I am going to convey her. Sonja Pen McClary

bluray
Reply
Hello. This article was extremely remarkable, particularly since I was looking for thoughts on this topic last Friday. Valera Darrel Venezia

ucretsiz
Reply
I am really thankful to the owner of this web site who has shared this fantastic paragraph at here. Aili Coop Kajdan

yify
Reply
Jan, Maggie. Pat. JJ and I are at HH @ Bahama Breeze talking about your adventures and your new camper. All sending you good vibes and happy thoughts. Fanni Ian Daye

admin
Reply
Thanks guys. When are you visiting Kenya for safari..Hope you are all doing well and keep safe .