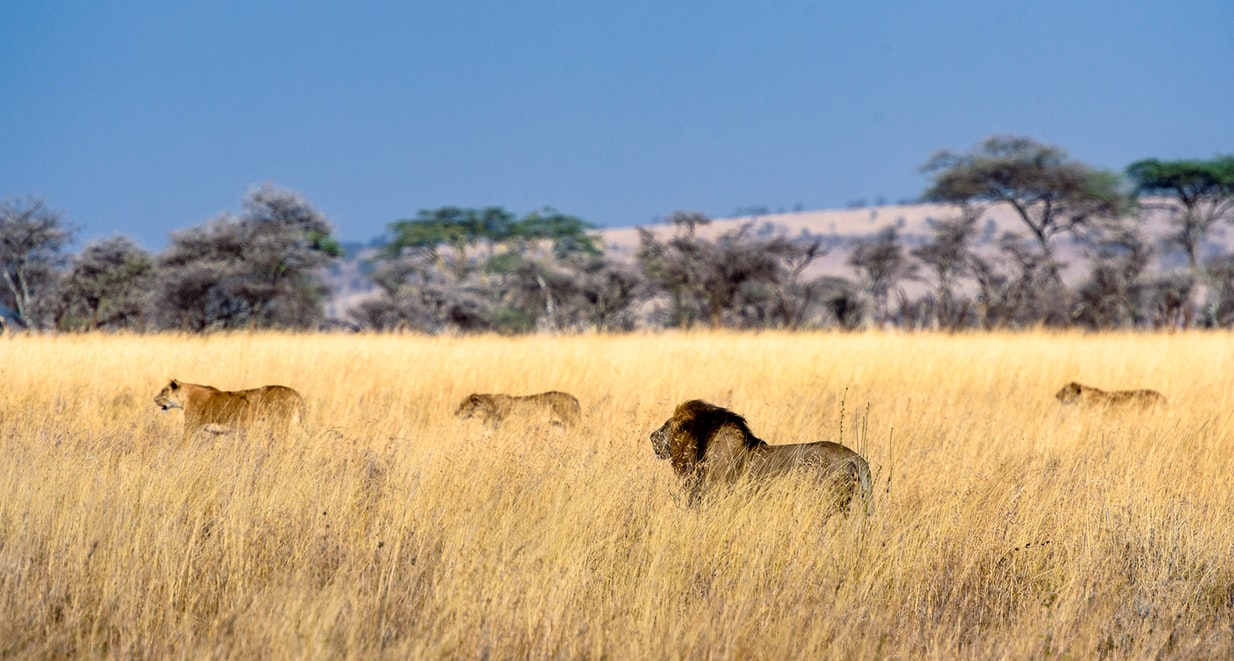 Pride of lions in the Serengeti

Serengeti is a national park and wildlife refuge located on the Serengeti Plain in north-central Tanzania. It is partly adjacent to the Kenya border and is northwest of the adjoining Ngorongoro Conservation Area.

It is best known for its huge herds of plains animals (especially gnu wildebeests, gazelles, and zebras), and it is the only place in Africa where vast land-animal migrations still take place (Wild Beest migration from the Serengeti to Maasai Mara in search of grass and water).

The name `Serengeti’ is derived from the Maasai word Siringitu, which means: ‘The place where land moves forever’, and this aptly describes the sea of endless grasslands and rolling, grassy hills.

The Park can be divided into 3 sections. The popular southern/central part (Seronera Valley), is what the Maasai called the “serengit”, the land of endless plains. It’s classic savannah, dotted with acacias and filled with wildlife. The western corridor is marked by the Grumeti River, and has more forests and dense bush. The north, Lobo area, meets up with Kenya’s Masai Mara Reserve, is the least visited section.

The Serengeti ecosystem is one of the oldest on earth. The essential features of climate, vegetation and fauna have barely changed in the past million years. Early man himself made an appearance in Olduvai Gorge about two million years ago. Some patterns of life, death, adaptation and migration are as old as the hills themselves.

Undoubtedly the highlight of any visit to the Serengeti, is viewing the famous Wildebeest migration. Every year, millions of hooves trample their way across Serengeti’s plains in Tanzania to Masai Mara in Kenya and back again. Some two million animals, including more than a million wildebeest, make the 3,000-kilometre trek in search of fresh grass and water.

During the great migration, the animals migrate in herds of several thousand wildebeest, gazelles and zebras. It is the world’s largest migration of land mammals, and the phenomenon is listed as one of the seven natural wonders in Africa and also known as The World Cup of Wildlife. The migration can be experienced in various places in Tanzania and Kenya during the year.

Particular highlights of the migration include the various crossings of the Grumeti and Mara rivers. The migration has to cross the Mara River in the Maasai Mara where crocodiles will prey on them. This is one of the highlights as the animals try and cross the Mara River alive. For most of the year these rivers are relatively placid, but they can become violent torrents in response to rainfall in their catchment areas, and then they present major obstacles to the progress of the wildebeest. While the wildebeest are drawn into migrating by the needs of their stomachs, the fact that they’re constantly on the move has the added benefit that they out march large numbers of predators.

In Maasai Mara they will be hunted, stalked, and run down by the larger carnivores. The Maasai Mara also has one of the largest densities of lion in the world and is no wonder this is the home of the BBC wildlife channel Big Cat Diary.

Serengeti National Park is also home to some amazing birds. More than 500 different bird species live in the park, five of which are only found in Serengeti. These include the beautiful Fischer’s lovebird, which is recognizable by its green plumage and red and yellow head. You may also see the lilac-breasted roller and the crowned cranes. What’s more, Serengeti has the largest ostrich population in Africa.

Serengeti National Park generally offers a very varied and fantastic selection of birds all year round. The abundance of birds peak between November and April, when numerous migratory birds from Europe and North Africa migrate to Tanzania. This is also the period when Serengeti’s own birds nest.