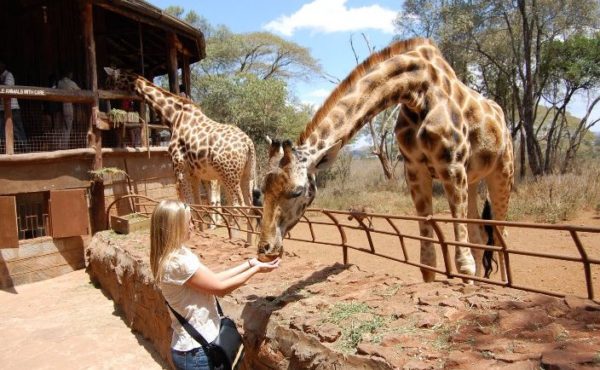 Karen Blixen’s home lies at the foot of Ngong hills,and is now preserved as a museum.A visit here will expose you to the furniture, artifacts and photographs from her days as a pioneer coffee farmer. Soon after, we drive you to the giraffe center, where families of the rare Rothschild giraffe can be hand fed and photographed from a platform at giraffe’s eye level.
There is a restaurant within the center where you can sit for a cup of afternoon tea before returning to the comfort of your hotel room.

Giraffe Centre is one of the top tourist attractions for visitors to Nairobi.  Don’t miss the opportunity to spend time with these wild giraffes. As well as a chance to learn all about giraffes in Africa, you will get the chance to feed a giraffe by hand and if you are lucky, even kiss one.

Jock Leslie-Melville and his wife, Betty, started the Centre’s work in 1979. This inspiring couple came to realize that the Rothschild Giraffes were severely endangered, with fewer than 180 Giraffes left in some areas. They brought two giraffes to their home in Langata with the aim of breeding. Since then, over 40 pairs of breeding giraffes have been released into the wild. The African Fund for Endangered Wildlife was set up and in 1989 the  Centre was born.

The  Centre has evolved into one of Nairobi’s most popular tourist destinations. The  Sanctuary is a huge protected site where giraffes are able to wander free and safe. Opposite the sanctuary is a 12-acre area of bush where the Centre and infamous Giraffe Manor are located. The  Manor hotel was bought from the Melvilles in the 1990s and has morphed into one of the premier luxury hotels in the world.

The Giraffes are wild but have learned that visitors to the Centre mean food. They spend the night in the bush, but every morning at sunrise you will find them line up at the sanctuary gate to cross the road into the  Centre. If you drive past the Centre for about 100 meters you will see the gates either side of the road and may be lucky enough to catch a glimpse of the giraffes patiently waiting.

As you walk in, you are greeted by the towering forms of giraffes eating from the hands of their human admirers. A raised platform that allows you to interact with them at head height or you can stand at their feet and marvel at their lofty heights. Pellets of corn, wheat, grass and molasses are handed to visitors which the Giraffe gracefully take from your hand. Those that are dropped are greedily gobbled up by the warthogs that dance between the giraffe’s legs.

The Giraffe Sanctuary entrance is opposite the centre. The sanctuary stretches all the way right to Nairobi National Park, separated by Magadi road. It is home to many differ

ent species of bird and loads of warthogs. You can wander down to the Gogo River or view the Ngong Hills from the viewing platform. The many warthogs live in deep black holes, so be wary. In addition, the odd hyena, leopard and even lion make its way into the sanctuary. Whilst the sanctuary is cleared if a lion is around, it adds a certain frisson of excitement to an otherwise sedate walk!

At the foot of the Ngong Hills, 10 kilometers from Nairobi, lies a 19th century bungalow named after renowned Danish author Karen Blixen. The building houses the Karen Blixen Museum.

With its serene environment, lush green lawns and cool breeze, one cannot help but fall for its charm and promise of tranquility.

Today it has most of Karen’s furniture and a museum shop that sells handicraft and postcards. Its gardens are also rented for weddings and corporate events. The building’s unique architecture and its association with European settlers and the iconic Karen Blixen give the museum unique historical significance.

The Karen Blixen house meets three of the customary criteria for historical significance. First, it is associated with the broad historical pattern of European settlement and cultivation of East Africa. Second, it is associated with the life of a person significant to our past as the home of Baroness Karen Blixen from 1917 -1931. As such, it served as the setting and basis of her well-known book Out of Africa, written under the pseudonym Isak Dinesenand as a gathering place for other well-known personalities of the period.

Third, the building embodies the distinctive characteristics of its type, period and method of construction. The house’s architecture is typical of late 19th century bungalow architecture, including the spacious rooms, horizontal layout verandas, tile roof and stone construction typical of scores of residences built throughout European suburbs of Nairobi in early decades.

The chronology of the house begins with its construction in 1912 by the wealthy Swedish civil engineer, later honorary Swedish consul to Kenya, Ake Sjogren. It served as the main residence on his Swedo -African coffee company, an estate of over 6,000 acres. The house was soon visited while on safari by the Danish count Mojen Frijs, who upon his return to Denmark persuaded his cousin to seek their fortune in Kenya.

Baron Blixen acquired part of the estate in 1913 and the remainder in 1916. Karen Blixen called the house “Bogani” or “Mbogani” meaning a house in the woods, and occupied it until 1931.

Located at The Nairobi National Park, Daphne Sheldrick’s Elephant Orphanage looks after and supports orphaned baby elephants and rhinos who have lost their mothers to poaching, death, injuries, on getting lost in the wild or other tragedies. Besides feeding, washing and walking the babies, Daphne and her dedicated staff of keepers provide emotional support to the orphans as they raise them to be released back into the wild when they are ready.
It is worth a visit to the park to see the young elephants interacting with their keepers – playing, taking mud baths and being fed with milk. This is a rare sight to watch and a most memorable way to get up close to the babies and observe their playful habits, something which is not possible or even safe during your safari in the wild. 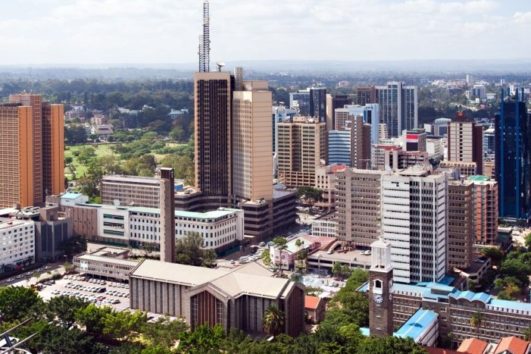 A guided tour of the city of Nairobi (better known as the city in the sun) will generally include the city market; which houses several curio shops. Its surrounding bazaars, a drive past Kenyatta International Conference Center, which was until recently the highest building in the region, the parliament buildings which are adjacent to the late Jomo Kenyatta’s mausoleum, the railways museum and the Nairobi University.
For coffee lovers, feel free to ask your guide to show you to one of the many coffee lounges for a cup of pure Kenyan coffee. The tour ends with a visit to the Snake Park and national museum. 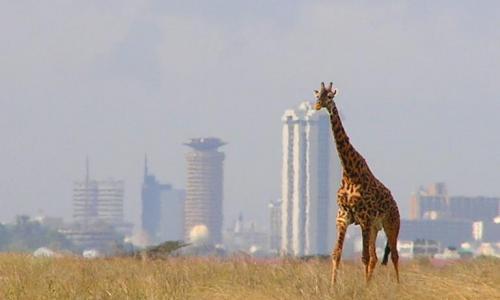 There was a time not so long ago, when lions freely roamed the streets of Nairobi. Today they can be seen only 14 kilometres from the city center in the Nairobi National Park. The Nairobi National Park boast of being the only Park in the world with such close proximity to a major city.
For short term visitors, this park contains most of the animals to be seen on more extended safari such as the rhino, buffalo, cheetah, zebra, giraffe,plenty of antelopes and gazelles.
The park is best visited early in the morning and the game drive takes 3 to 4 hours. There after you can opt to enjoy breakfast at the famous Rangers restaurant which is been built overlooking a waterhole that periodically attracts game, treating you to an authentic bush experience.