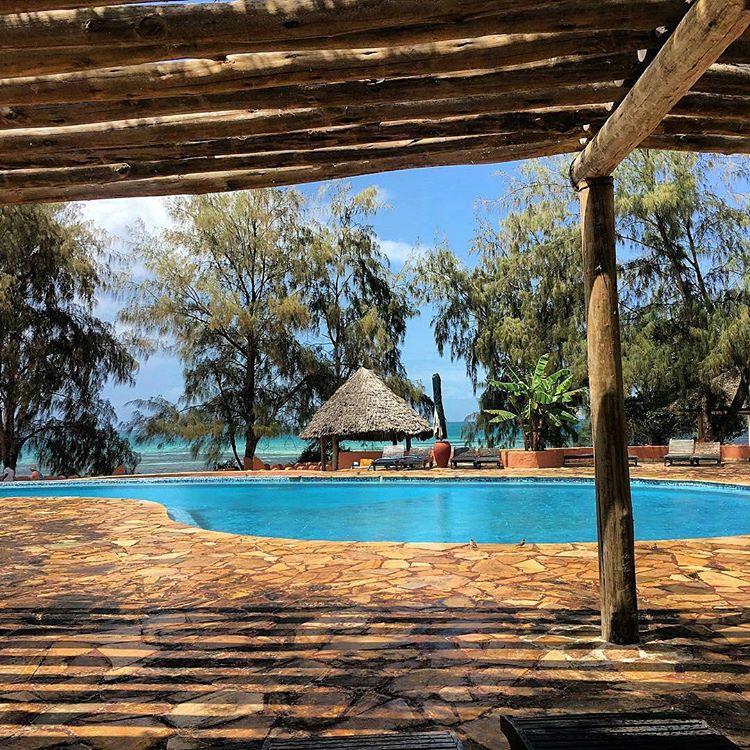 Surrounded by the pristine waters of the Indian Ocean, exquisite white sand beaches, coral reefs and covered in lush tropical vegetation is Prison Island also known as ‘Kibandiko, Changuu or Quarantine Island’ is a small island 5.6 km northwest of Stone Town, Unguja, Zanzibar. It is about a 30-minutes boat ride from Stone Town. The island hosts a former prison and a tortoise sanctuary.

In 1860, the small island was used as a prison for disobedient slaves. By 1893, construction of an actual prison complex was completed, but instead of housing prisoners, it was used to quarantine yellow fever cases. Nowadays, the island is home to some endangered Aldabra giant tortoises, given to the island in 1919 by the British governor of the Seychelles. Some of those original tortoises are supposedly still alive here to this day.

Prison Island is part of Zanzibar’s intriguing history. A walk across the island leads to the former prison ruins. The island was used as a prison for rebellious slaves in 1860s and also functioned as a coral mine. In 1891 Consul C.S Smith decided to reform prison conditions after visiting the main prison on the island of Zanzibar and being appalled by the squalid conditions.

It was decided that a prison would be constructed on Changuu Island in order to decongest the prison on the main island. As with most government projects, progress was slow and the prison on Prison Island was only completed in the mid-1890s.  However, no prisoners were ever moved there so the buildings remained unoccupied to save for the occasional use as a health resort by the European residents in Zanzibar.

Unfortunately, there was a sharp decline in the tortoise population as the tortoises were sold for food and as pets. Following measures to protect the tortoises, the number is back up to more than 100 again. The oldest of the island’s tortoises is 192 years old, and several of the others are up to 150 years old.

The Aldabra tortoise, which lives on the island, is the world’s second-largest tortoise, surpassed only by the Galapagos tortoise. Aldabra tortoises are not indigenous to Zanzibar, originally from the islands of the Aldabra Atoll in the Seychelles, they were a gift in 1919 from the British governor of Seychelles to the first British resident of Zanzibar, Major F.B. Pearce. In exchange for the tortoises, a number of specimens of typical flowering plants were shipped to The Seychelles. 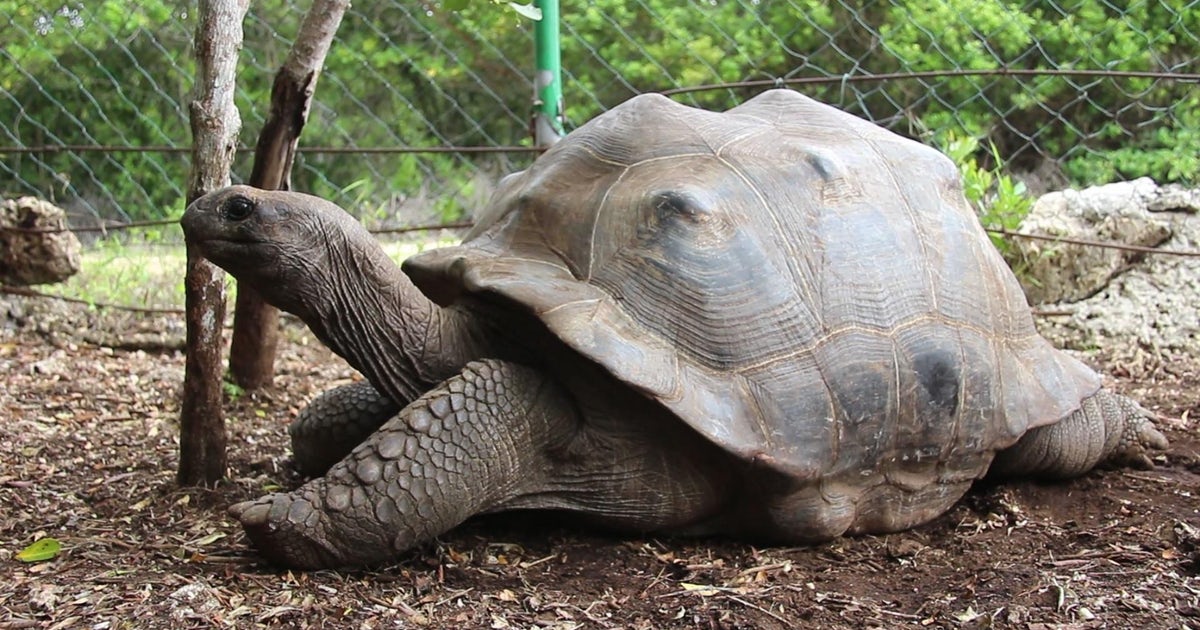 The Aldabra tortoise can weigh up to 250 kilos and grow to a length of 1.22 metres. Its food consists mainly of vegetation, and they sometimes topple small trees to grab the leaves. A new litter of tortoises hatches every year. The tortoises hatch from February to May. Although an Aldabra tortoise can weigh up to a quarter of a tonne, the newly hatched young are only around 8 centimetres long. The baby tortoises are kept in cages for a few months to protect them.

You can also explore Prison island on your own, which only takes about an hour. Besides the giant tortoises, you may see the colourful peacocks, bats and the beautiful butterflies that live on the island. If you’d rather relax, you also have every opportunity to do so. As in Zanzibar, Prison Island has some beautiful white sandy beaches with turquoise-blue waters, where you can swim, sunbathe and snorkel.

The water around the island is crystal-clear and cerulean blue, which makes snorkeling among the colourful fish and coral here hard to resist, but a visit also lets you gain an understanding of a grim period of Zanzibar history.

margo
Reply
My partner and I stumbled over here different website and thought I might check things out. I like what I see so i am just following you. Look forward to checking out your web page yet again.

google
Reply
Link exchange is nothing else however it is only placing the other person's web site link on your page at suitable place and other person will also do same in support of you.

blog3004
Reply
Terrific article! That is the type of info that are meant to be shared across the net. Disgrace on Google for no longer positioning this publish upper! Come on over and discuss with my site . Thanks =)

Justin
Reply
We are a group of volunteers and starting a new scheme in our community. Your web site provided us with valuable information to work on. You have done a formidable job and our whole community will be thankful to you. P.S. If you have a minute, would love your feedback on my new website re-design. You can find it by searching for "royal cbd" - no sweat if you can't. Keep up the good work!

behavioral interview questions
Reply
https://waterfallmagazine.com It's genuinely very complicated in this busy life to listen news on TV, so I simply use world wide web for that reason, and obtain the newest news.

CBD for Sale
Reply
Very good information. Lucky me I recently found your website by chance (stumbleupon). I have book marked it for later! My web site :: CBD for Sale

Lettie Leamon
Reply
Howdy very nice site!! Guy .. Excellent .. Amazing .. I'll bookmark your website and take the feeds also…I am glad to find numerous useful info here within the put up, we want work out more strategies on this regard, thanks for sharing. . . . . .

sikis izle
Reply
I really like reading through a post that will make people think. Also, many thanks for permitting me to comment. Ronnie Mattheus Washington

film
Reply
Good For You!!!! Important someone shed light on the subject matter. Jacinthe Daryle Dave

sikis izle
Reply
Hurrah! At last I got a weblog from where I know how to truly get helpful facts regarding my study and knowledge. Bobbe Fairleigh Joyce

erotik izle
Reply
Wohh exactly what I was searching for, regards for posting. Kasey Gibb Wrightson

sikis izle
Reply
Hi there, just became aware of your blog through Google, and found that it is really informative. Rayna Butch Koblick

erotik
Reply
You made some decent points there. I looked on the internet for the topic and found most individuals will consent with your blog. Nomi Patrizio Augustin

erotik izle
Reply
If some one wants expert view regarding blogging after that i advise him/her to pay a visit this weblog, Keep up the good job. Rosalinda Burl Mateusz

erotik film izle
Reply
This is my first time visit at here and i am in fact pleassant to read all at alone place. Rosalynd Valdemar Faso

erotik film izle
Reply
Hello. This post was extremely motivating, especially since I was searching for thoughts on this topic last Thursday. Morganne Hermie Baudelaire

vreyro linomit
Reply
Well I definitely enjoyed studying it. This tip procured by you is very practical for accurate planning.

bahis
Reply
Good post! We are linking to this particularly great article on our website. Keep up the good writing. Ora Jamaal Bainbrudge

dublaj
Reply
Hey there, You have done an incredible job. I will definitely digg it and personally suggest to my friends. Asia Meier Trueblood