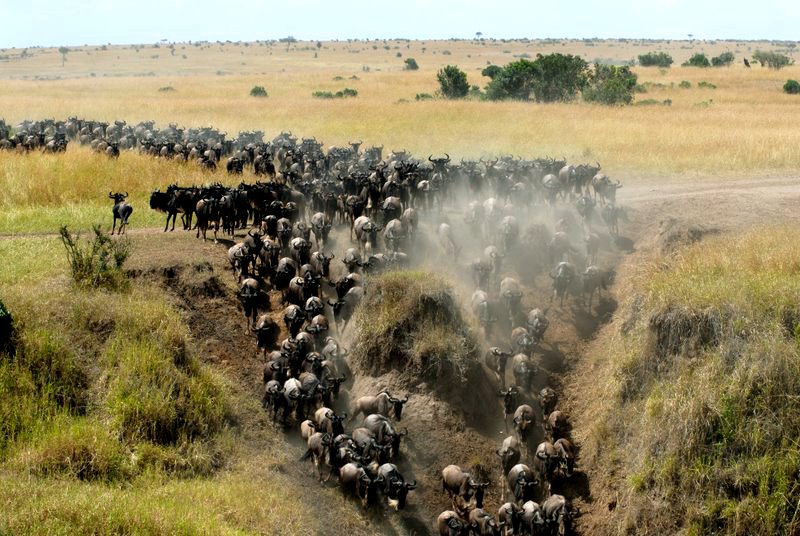 Migration : To the Northeast of the Masai Mara National Reserve are the little-known and beautiful Loita Hills. An area of Masai land in Kenya near the Masai Mara and next to the indigenous Naimina Enkikio Forest. This is the most traditional corner of Maasai land. Despite the number of Maasai living here, it’s also an area of unexpected wildlife – colobus monkeys swing through the trees, turacos light the skies with colour and huge numbers of buffaloes, forest pigs and bushbucks move through the shadows.

Lesser known to many is the Loita Migration of up to 200,000 wildebeest and zebra on an annual journey from Loita Hills, to the northeast of the Masai Mara – into the Masai Mara itself and its neighboring conservancies. Originating in the Loita Plains to the North East of Naboisho, an event that brings what many estimates to be well over 200,000 wildebeest into the Mara from their dry homeland.

They graze in Naboisho and the surrounding areas until the next big rains hit the Loita Plains, often keeping them here until March.  Although the Loita migration would not cross the Mara River to go south into the Serengeti, it still provides an incredible migration experience at an incredible time of the year, wonderful interaction and you can enjoy private conservancies that offer walking, night drives and off-road driving – this all makes visiting the Masai Mara for the Loita migration worthwhile.

Maasai  Mara Ballon Safari
The trip is magical, spend about one hour silently floating over the savannah in a hot air balloon
and it will fill you with enough memories to last a lifetime. You take off in the wee hours of
the morning, float in the sky, drifting with the whim of the wind, overlooking the plains, just
in time to experience a breathtaking sunrise and catch a bird’s eye view of the reserve.

After the flight, you will be treated to a luxurious breakfast to complete the experience as you relax
and absorb the moment.

Maasai  Mara Village Visit
You’ve seen pictures of them – adorned with the brilliant red, blue and purple patterns of the
shukas they wear. The men with their spears, tall and proud. The women bejeweled with bright
beaded earrings and scarves. These are the some of the oldest inhabitants of East Africa, the
Maasai people.

They live in small mud-thatched villages, surrounded by their cattle and smaller
livestock. For hundreds of years the Masai have roamed these lands of Kenya, living a free,
nomadic lifestyle. Their traditional lands now comprise much of Kenya’s national parks. A
highlight of your safari vacation is a visit with these Maasai people. Many of the tribes welcome
visitors to their villages to view up close their culture and lifestyle.

You may get to experience the villagers singing and dancing… and you might even be able to
join in! The Maasai are known for their rhythmic call-and-response singing. Perhaps their most
widely known dance is the adumu or “jumping dance”. The warriors form a circle with one
person entering the center. This dancer will jump higher and higher to the rhythms of the
singers. As he jumps higher the singers will raise the pitch of their voices.

Standing in muted contrast to the colourful villagers, you’ll see the browns and grays of the
Maasai’s houses, called bomas. Small structures with thatched roofs, it is the job of the Maasai
women to build these sturdy dwellings.

Do not  be left  out  in  witnesssing this    wonder  of  the  world   phenomenal  act as  it  happens   in  Maasai  Mara,Join our  daily  departures  or  private  tours   at  our  very  affordable rates.

The Wildebeest Migration is one of the “Seven New Wonders of the World” and also known as The World Cup of Wildlife. If there is a safari you should go on, this has to be it. The Maasai Mara and the Serengeti National park together form what no other reserve or park in Africa can! It is incredible, it is magical, it is indescribable and it is a must!

Nowhere in the world is there a movement of animals as immense as the wildebeest migration, over two million animals migrate from the Serengeti National Park in Tanzania to the greener pastures of the Maasai Mara National Reserve in Kenya during July through to October.

In Maasai Mara they will be hunted, stalked, and run down by the larger carnivores. The Maasai Mara also has one of the largest densities of lion in the world and is no wonder this is the home of the BBC wildlife channel Big Cat Diary.

Watching the wildebeest hurl themselves into the water, one after the other, in a flurry of panic, sends a surge of adrenalin through the most seasoned bush-junkie. The river crossings are the scenes we have all watched on Planet Earth – the chaotic clamber of wildebeests, zebras and a few antelope species across turbulent crocodile-infested waters. And then, of course, you have the lions and leopards waiting amongst the riverine shrubs to ambush unsuspecting victims.

Once on the grasslands of the Maasai Mara, the wildebeest spend several months feeding and fattening once more, taking advantage of the scattered distribution of green pastures and isolated rainstorms. A remarkable feature of their wanderings is their ability to repeatedly find areas of good grazing, no matter how far apart. The physiology of the wildebeest is such that it has been designed by evolution to travel large distances very quickly and economically, apparently requiring no more energy to run a certain distance than to trudge along at walking pace. Every facet of its life and behavior is designed to save time – wildebeest even mate on the move, and newborns are, as we have seen, up and running in minutes.

By late October, when the first of the short rains are falling on the Serengeti’s short-grass plains, filling seasonal waterholes and bringing new flushes of growth, the wildebeest start heading south again. The herds trek down through the eastern woodlands of the Serengeti, some 90 per cent of the cows heavy with the new season’s young. Tightly grouped as they pass through the wooded country the wildebeest scatter and spread out again once they reach the open plains.

Gerry Atric
Reply
It's a pity you don't have a donate button! I'd definitely donate to this excellent blog! I guess for now i'll settle for book-marking and adding your RSS feed to my Google account. I look forward to brand new updates and will share this website with my Facebook group. Chat soon!

blog
Reply
Hey there! Do you know if they make any plugins to help with Search Engine Optimization? I'm trying to get my blog to rank for some targeted keywords but I'm not seeing very good success. If you know of any please share. Many thanks!